Teaching Bowenwork® Around the World

The Bowen Therapy Academy of Australia (BTAA) has been dedicated to the teaching of Bowenwork since 1987. The pioneering work of BTAA, both in Australia and overseas, has seen the spread of Bowenwork to over 30 countries worldwide.

In 1976, Ossie and Elaine Rentsch began utilizing Mr. Bowen’s methods in their clinic in Hamilton, Victoria. They held their first Bowenwork (also known as Bowtech®) seminar in Perth, Australia in 1986, and founded the Bowen Therapy Academy of Australia (BTAA) the following year. By 1990 Ossie and Elaine Rentsch were teaching full time throughout Australia and had begun teaching in other countries as well. Now there are over 90 authorized Bowenwork instructors throughout the world.

To date, BTAA and affiliated schools in other countries, such as American Bowen Academy in the U.S., have taught well over 20,000 students worldwide. Many of these students have been in active practice for over 20 years. 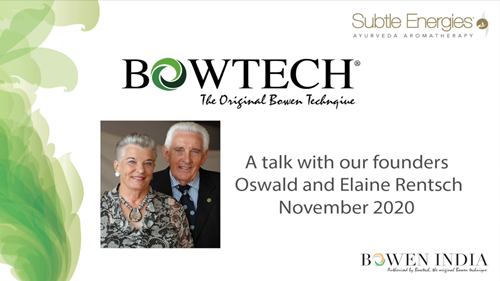 Click here and use password bowentalk to see the live Zoom presentation with Ossie and Elaine Rentsch, courtesy of Subtle Energies. Recorded in November 2020, with over 200 practitioners from many countries around the world participating, the Rentsches reminiscence about time spent with Tom Bowen, their experiences as practitioners, and answer participants’ questions.

BTAA continually works to refine and expand the teaching curriculum to include the latest research and best practices in order to maintain high standards for instructor and practitioner training. In addition, BTAA holds bi-annual, international conferences that feature well-known speakers from the medical community and the community of BTAA instructors and practitioners.